Both names in the binomial scientific taxonomy are composed of the greek word ὕδωρ “hydor” which means water, and χοῖρος “choiros” which means pig or hog, literally ”water pig”. The common name Capybara is derived from the Tupi- Guarani word ka’apiûara which means “grass eater”, both names describe our animal perfectly.

Capybaras are the largest rodent in the world, with an appearance that would make you think of them as giant guinea pigs. They are super-sized amazon marsh leaf eaters, with a thick snout, long frontal teeth and a big bottom with a vestigial tail. They lack down fur and lower fur, which means they can get sunburned since part of their skin is exposed. To avoid this they wallow in water and in mud, which is always available to them since they are semiaquatic and live only next to bodies of water.

Their adaptation to their watery mean has given them webbed feet, which makes them very quick in the water, where they can stay submerged for several minutes. Capybaras are very social, they stay together in groups of 10-20 and many other animals like to stay around and on them.

Capybaras make their home next to rivers, marshes, lakes and bodies of water throughout the tropical lowlands of South America. They can be found in all South American countries except Chile. Their range is very broad but they only live next to the large rivers and lakes, meaning they do not inhabit inland forest.

As their Guaraní name foretells, Capybaras are voracious plant eaters, strict herbivores that require constant grazing to grow to the size they do. To help absorb more proteins and vitamins from their food, Capybaras are autocoprofagous, which means they eat their own poop; something that gives them the extra gut flora they need for a better digestion.

Capybaras are social creatures, if not the most social of all. They live in groups of around 20 individuals and when groups gather up to a 100 of them can be seen altogether. They are very tolerant and friendly to other animals, to the point that many birds and even other smaller capybaras like to sit on top of large individuals as if they were moving chairs.

Capybaras can produce a wide variety of sounds to communicate and leave complex scent markings to help with their reproduction habits. They mate only in the water and dominant males get to mate with more females than non-dominant males, though there are more litters in total that come from non-dominant males. Young capybaras can be predated by ocelots, eagles, jaguars, caimans and anacondas, while adult Capybaras only have the latter three as predators.

Capybaras have a high reproductive rate, which is their greatest advantage against their main threats, which are hunting and habitat loss. Their population is stable and they have only disappeared in few places of their original range. Capybaras are considered a good meal in some countries like Venezuela while in others they are considered not eatable. Their hide was once traded in Argentina which caused the death of more than 80,000 of them. They are currently listed by the red list of threatened species as Least Concern, which means that for the moment they are not endangered.

View conservation assessment on this species

BIG MOUSE- They are the largest rodent in the world.

BEACH FOLKS- Capybaras can get sunburned, their fur doesn’t cover them completely. To avoid it they willow in the mud and in the water.

FRIENDLY GIANTS- These animals are so docile, that many birds and even other animals use them as moving chairs.

SELF-HELP- Capybaras eat their own poop, it helps them digest better their plant diet. 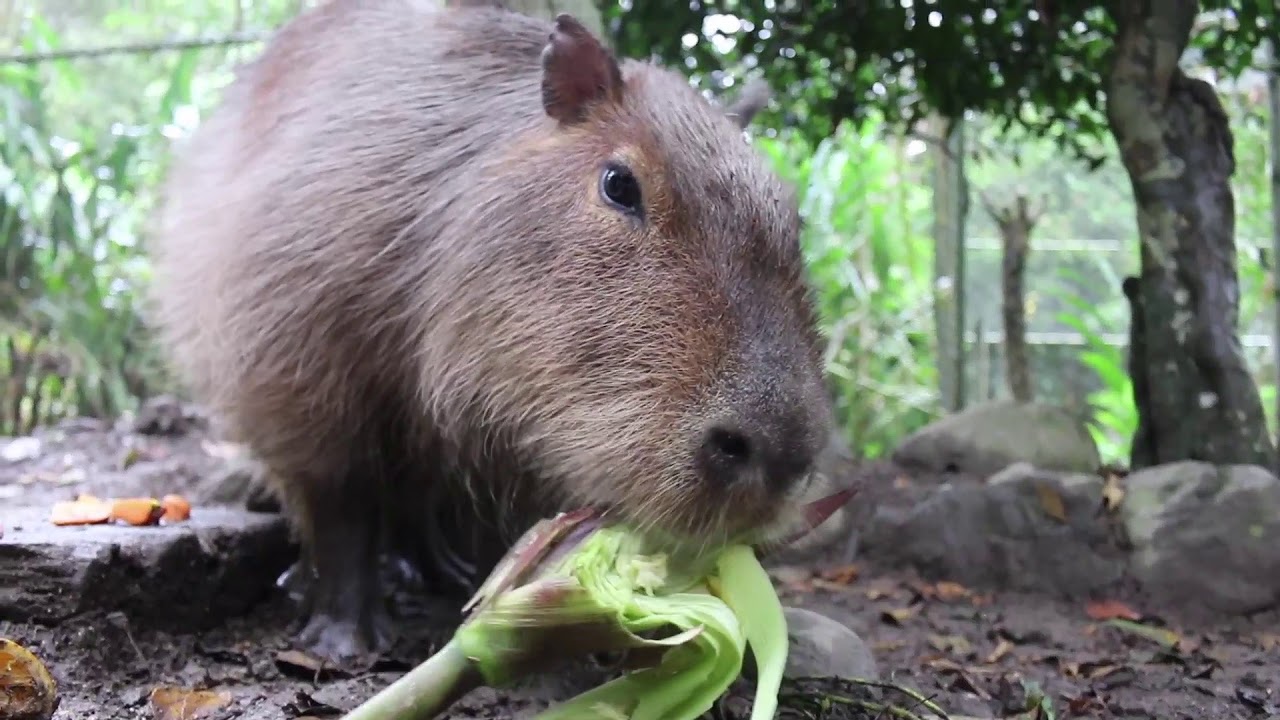 Capi is a young female Capybara that lives at La Senda Verde from 2014 when she arrived being only 5 months old. She was being kept by a group of Christian girls that had kept her on the 5th story of a building in the town of Caranavi. They told us that she was taken from her mother who was killed, along with another male baby capybara who escaped.

When she arrived she had very few hair and didn’t know she could swim. We had to teach her and she finally learned. We have seen her grow to her adult size which she reached when this article was written in June 2018.